Most contemporary exterior mural artists are graffiti artists and as well as using spray cans use
airbrushes to get the large scale blends over large areas to create figurative art to sometimes
staggering effect.

Traditionally interior mural artists grew from the Renaissance with splendid religious skies with
renditions of religious figures and stories then later in Baroque and Palladio we saw more
romantic renditions with large muscular figures and more nature.

The modern-day mural artist working on interiors should be able enough to incorporate figures
into his work even to the level of portraiture and also adapt to the best style to suit the
commissions.

As a practicing mural painter, I spent time actually doing some portrait commissions to fine-tune
my art, even so, I would not consider myself a portrait artist more of a muralist that can paint
portraits.

Occasionally an interesting commission comes along where this ability comes in useful for
example having previously done some murals for London zoo ZLS they asked me to contribute
to a new Lion area that was being created.

An area was constructed as an Indian village as the lions were mostly from India and wanted to add some personality to the zone by introducing one of the important protectors of lions and was partly responsible for there still being in existence today.

Prince Nawab Mahabatkhanji III in Junagadh state as had his predecessors did more to stop the
hunting of lions in his principality than any other individual stopping the lions going into
extinction.

We decided to create a portrait of Nawab in a traditional style on a rustic wall near the entrance
to the village.

I first did a scaled drawing, then painted the portrait in the studio on artificial canvas. Once
completed we took it on-site and literally plastered up to and covering the edge of the canvas
and when the plaster was dry to paint a border which seamlessly blended the canvas and wall.

To add to the authenticity I painted trompe l’oeil cracks over the walls and portrait and finished
with coats of water-based varnish. 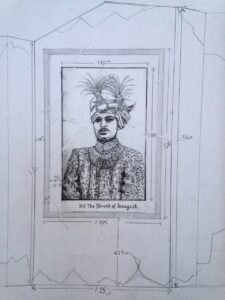 a scaled drawing of Nawab 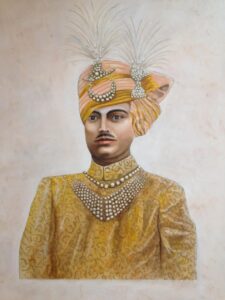