How ‘Oriental art’ has influenced wallpaper and wall murals

18 Jan How ‘Oriental art’ has influenced wallpaper and wall murals

Posted at 12:58h in Uncategorized by Nick 0 Comments

The late 17th and early 18th century was also the time when European decorators were
developing paper wallcoverings – what we would now call wallpaper – as a cheaper but still
smart alternative to tapestries and gilded leather wallhangings. The paintings and prints coming
in from China fitted with this wallpaper trend, as well as with the ever-increasing taste for Asian
decorative art. Enterprising British paper-makers began to produce wallpapers in pseudo-Asian
styles, just as the manufacturers of leather hangings were making their products look like Asian
lacquer panels.

At some point, probably in the 1740s, Chinese workshops began producing large woodblock
prints in a wallpaper format. It will probably never be known whether it was a European
merchant or a Chinese workshop manager who first came up with the idea of this new ‘Chinese
wallpaper’ product – it may well have been a fruitful collaboration between the ‘supply’ and the
‘demand’ sides of the East Asian trade.

However it may have actually come about, Chinese
wallpaper was from the start both Chinese and European, a truly global product.

This fashion for all things Asian was kept alive in the grand houses of Europe and the business
of hand blocked and painted wall paer was kept alive in China where these products were
almost exclusively for export.

In modern times 1980’s faux finishes became very fashionable and wall murals, there was also
a resurgence in importing hand-painted high-quality wallpaper which was designed in Europe
with varying themes usually with birds and cherry blossoms.

In the 18th century, hand-blocked wall covering was very much elitist but with the introduction of
commercially produced wallpaper it became accessible to the masses.

From the 1980’s up to present times we began to see such company’s as De Gurney
producing such high-quality wall coverings using gold and silver that again such wallpapers
could only be afforded by the very wealthy.

Whereas wallpapers had historically replaced the artisans and mural artists in recent times the
designers are reaching out to mural painters to paint murals in similar themes for much less
cost.

Currently, as a mural artist painting in London, I have three commissions to paint oriental murals
for large walls for clients in London, Dubai and Singapore, examples I will show in future blogs. 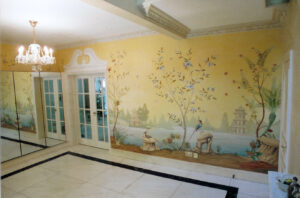 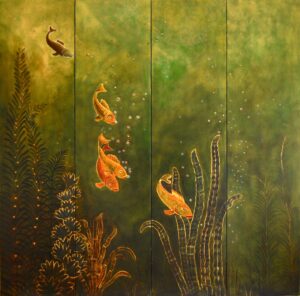 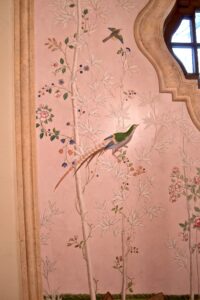