I have mentioned in other blogs something of the history of hand-painted Chinese wallpaper and
how it was enjoying something of a renaissance with ever more expensive versions coming onto
the market by companies like De Gournay and Zuber.

I have also mentioned that the rise in the cost of wallpaper has created a demand for mural artists to
paint wall murals in the style of Chinoiserie, as my latest project was painting a mural with this theme
I decided to do a blog outlining the whole process.

I was contacted by a London and Dubai based company of interior designers who proceeded to
send me some images of chinoiserie, the images were hand-embroidered onto a fabric background
not an easy thing to reproduce by painting.

They then asked for my interpretation of the theme which led to an interesting challenge that I could
create an original mural painting by using this for inspiration.

I visited the site in Knightsbridge; the mural was to take up the whole of one wall of a bedroom which
was dissected by a mirror two-thirds of the way down which made it easier to work on in the studio
as it could be done in two sections on canvas.

To avoid sketching directly onto the canvas which would be difficult to correct for any adjustments,
the area was first covered with tracing paper which can be erased and changed with ease and an
the original design was drawn up.

When the mural design looked balanced with the correct amount of leaves and the placement of the
branches in keeping with the design the whole cartoon were directly traced onto the canvas using a
a minimal amount of graphite.

I then firstly painted the branches carefully choosing the pallet which was the same combination of
colors to be used throughout the mural, mostly Paynes grey sometimes mixed with raw umber or
ultramarine and splashes of burnt umber and burnt sienna in the leaves to add warmth and contrast.
When the mural was complete I went over the leaves creating fine veins in silver which reflects from
certain angles giving an expensive exclusive touch. 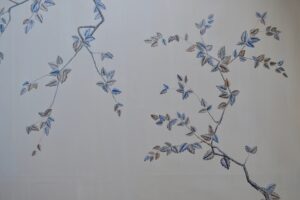