In Richard’s mural gallery is a vast array of subject matter but what is consistent throughout his
mural painting is the high level of detail work occasionally bordering on photorealism.

Using a clever mixture of perspective and shadows (Trompe L’oeil) the eye can be drawn to the
infinite distance or to the end of a diminishing street, creating the illusion of space and creating
an atmosphere, these are tools in the hands of a skilled mural artist.

Whether wall murals or ceiling murals they serve a chosen purpose as a beautiful decorative
wallcovering or a more sophisticated artistic mechanism to trigger the imagination and create a
story or mystery.

The cost of commissioning a mural depends on how long and how much detail is involved in
painting the mural. In the mural gallery, you will see some simple decorative murals which can
be done in a matter of days and also some very complicated murals which have a lot of detail
and can take weeks or even months to complete.

Mural painting has been made a lot easier for muralists recently with the introduction of
synthetic canvas which can now be purchased of widths up to 2.4 meters which is the height of
the average wall. 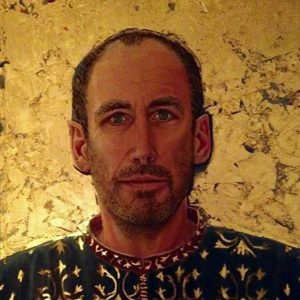 The synthetic canvas has the advantage that it does not shrink when it is
pasted to the wall and can be painted with acrylic or oil paints in the studio after which the mural
can be transported to its final location.

This can be more cost-effective for the client as well as the muralist, as it cuts out the cost of travel and sometimes the expense of staying away as well as the time lost traveling to the location.

This method of painting murals on canvas is not new and is called ‘marouflage’ and has been
around for a long time but has enjoyed a resurgence with mural painters in recent years with the
the invention of wide synthetic canvases. 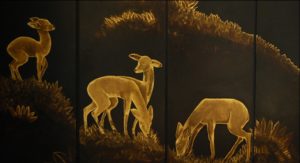 If you are interested in commissioning a mural firstly try and get some idea of what is roughly
required and contact Richard and after some discussion re. content and budget a sketch is made
and a firm cost established.

It is much more fun commissioning your own mural and so much more rewarding to become
part of a creative process.